Using evidence-based approaches to enhancing diversity will enable lasting effects on the workforce.

What Do We Know? 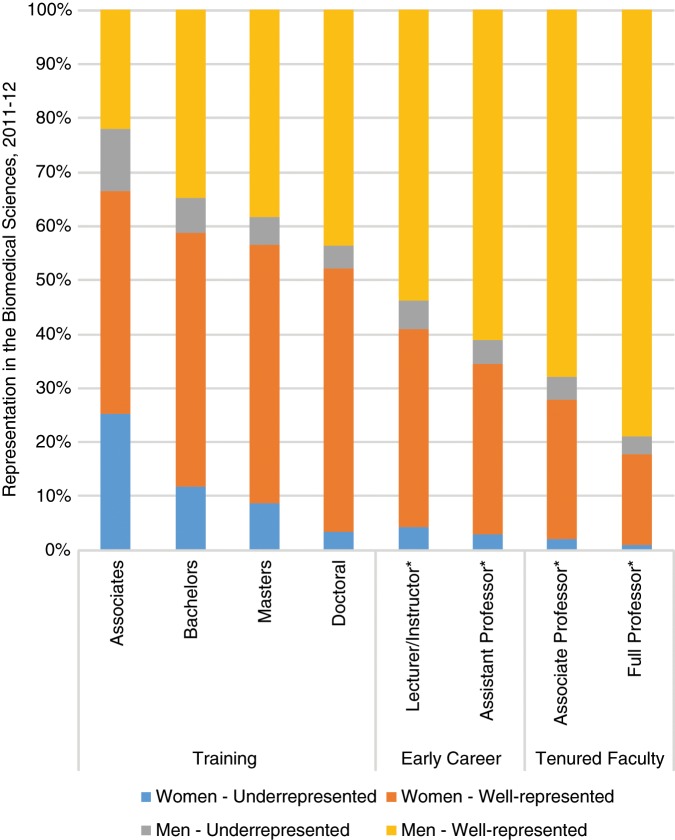 Figure reproduced from Valantine, HA, Lund, K, & Gammie, A (in press). A Systems Approach to Increasing the Diversity of the Biomedical Research Workforce. CBE Life Sciences 2016.

Data represents the 2011-2012 academic year. Data compiled using assessments from the 2013 Digest of Education Statistics (U.S. Department of Education, Institute of Education Sciences, National Center for Education Statistics (NCES)). Gender and race/ethnicity data analyzed by academic field (i.e., biological and biomedical sciences) at each stage of the academic training/career pathway. Scientists from underrepresented groups include Blacks/African Americans, Hispanics, Native Americans and Alaska Natives, Pacific Islanders, and multi-race scientists. Scientists from well-represented groups include Whites, Asians, and non-U.S. residents. While gender and race/ethnicity data from the 2013 NCES Digest are disambiguated by academic field during the training stages (i.e., trainees awarded biomedical science degrees at the associates through doctoral stages) in the 2011-2012 academic year, similar disambiguation of data are not currently available for the 2011-2012 academic year for early career and tenured faculty. Instead, data were compiled from multiple NCES data sets to estimate gender and race/ethnicity representation in the biomedical research and teaching workforce (refer to * in figure). Initial 2011-2012 data pertaining to gender and race/ethnicity representation in the total professoriate across all academic career stages were adjusted to reflect differences in gender and race/ethnicity representation between the total professoriate and that of the biomedical professoriate. These estimated 2011-2012 findings were further substantiated by close alignment with disambiguated 2004 NCES Digest findings.