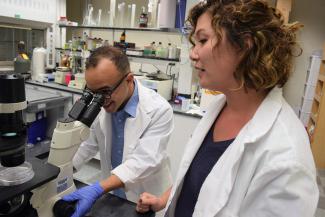 Gabriel Cartagena in the lab with mentor Lisa Smith.

Chances are, if you aren’t related to a scientist, or have never known one personally, you probably wouldn’t imagine yourself as one. Psychologists call this a lack of science identity. But other factors beyond who you know, such as who you are and what people think you can do, often shapes science identity.

Women and individuals of both sexes from underrepresented groups, although less abundant in the science community, bring unique perspectives to research questions. For example, women who choose science may be more likely than men to think the importance of sex as a biological variable in basic and clinical research thereby enhancing the quality of the research itself. Indeed, scholars have shown that gender diversity in some fields has led directly to advancing knowledge. Similarly, women of color who do become scientists are more likely to want to pursue research topics with high social value: topics that affect communities.

But there are other practical roadblocks that keep people away from science. For example: being afraid of a new educational climate, facing an unfamiliar culture, or not having role models to know that research is not only possible, but also fun and exciting. Or simply not having financial and other resources to pursue college -- or to persist through the lengthy training period of graduate school, postdoctoral research, and early faculty.

These multiple challenges, expressed through institutional culture and structure, contribute to perpetuating a scientific workforce lacking the diversity that is essential for accomplishing the NIH mission of discovery and translating those discoveries into improved health.

We are looking at this challenge like any other scientific problem. Analogous to the scientific method that is the cornerstone of our training as scientists, we need to apply the same rigor in designing and testing data-driven approaches for recruiting, advancing, and retaining future generations of biomedical researchers.

Through a novel NIH investment emblematic of using scientific rigor to assess workforce challenges, we are figuring out just how a person’s environment shapes their desire to pursue science – and to stay in it. Prior NIH programs to enhance diversity in the biomedical research training force were not optimally designed to provide answers regarding what approaches work, for whom, and it what contexts. We are now conducting rigorously designed studies that include controls and comparator groups, to understand a range of recruitment, advancement, and retention strategies across multiple different institution types.

This massive nationwide experiment, launched in 2014 and called the Diversity Program Consortium is using evidence-based strategies to enhance diversity in the biomedical workforce, using specific “hallmarks of success” to measure change and evaluate impact at three distinct levels: students, faculty, and institutional environment. A main component of the Consortium is Building Infrastructure Leading to Diversity (BUILD). This program, going on at 10 institutions nationwide, and with 100 partnership institutions, addresses novel approaches for intervening on the issues that affect entry and advancement during training. Nearly half of the BUILD sites and partnership institutions are minority-serving institutions.

Examples include strategies for improving science identity, enhancing individual and institutional resources, providing inquiry-based learning, and linking research to personal and culturally valued outcomes. BUILD does this by providing tuition relief for up to two years and offering students summer and after-college research experiences. These factors alleviate some of the real-life roadblocks to pursuing a research career.

But the Diversity Program Consortium is doing more: it is also studying the influence of faculty on students, the factors that allow faculty to succeed, and the role and impact of culture and climate on both students and faculty alike. To date, the Consortium has published 51 papers, reporting both scientific advances and effects of recruitment/retention interventions. I’ve spoken personally with many BUILD scholars and faculty and share some of their stories with you in this blog. As of Spring 2017, over 2,400 students have participated in BUILD activities, with some of them completing summer training programs and mentored research experiences. Almost 900 faculty have served as mentors, developed and delivered novel curricula, or participated in professional development activities. I encourage you to check out the Diversity Program Consortium website for even more.

The first is Brianyell McDaniel: one of eight children from a low-income family. Although she graduated at the top of her high-school class, she struggled in college before finding her footing and landing a spot in a lab, where she fell in love with research. But then, with just two months to graduation, she still did not have the credentials to get into graduate school. She applied to BUILD at Xavier University in Louisiana as a lab technician, which paid for GRE test preparation and enabled her to continue a research project that she has since sent in for publication in a scientific journal. Now accepted to graduate school, McDaniel is one step closer to her dream: “I can now reach my ultimate goal, which is to become an immunologist.” 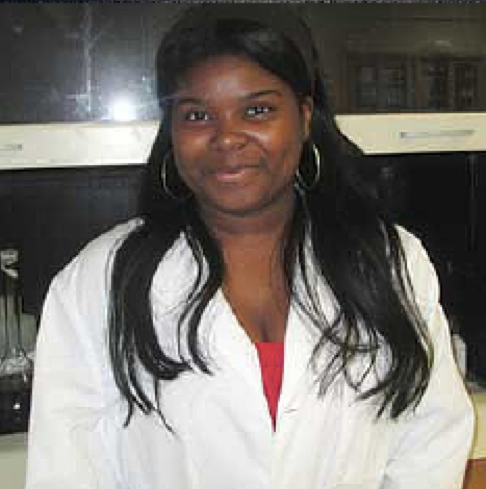 Brianyell McDaniel in the lab

Without BUILD, would Brianyell have found science?

Thousands of miles northwest, Gabriel Cartagena is a BUILD student at University of Alaska, Fairbanks. He’s a native Alaskan born to parents of Puerto Rican heritage, something that is a very important part of his life. Gabriel hopes to become a clinical health psychologist with the goal of helping underserved populations who often have difficulty accessing health resources. His current research centers on how addiction, inequality, and stigma interact and overlap with HIV/AIDS. This early in his career, he is looking wide to pursue this topic, through overlapping lenses of neuroscience, medicine, and psychology. Gabriel’s research recently won a prestigious award at a scientific conference, and in fall 2017, he will begin a Ph.D. program in Clinical and Health Psychology at the University of Florida, broadening his dual passions for psychoimmunology and interdisciplinarity. About BUILD, Gabriel says it has given him “the courage to pursue my dreams…and the humility of being part of something much bigger than myself.” I get the sense that his dreams are coming closer to reality every day.

Many miles away in the same state is Dr. Linda Nicholas-Figueroa, an assistant professor of biology and chemistry at Ilisagvik College in Barrow, Alaska. UAF is a BUILD partner institution with Ilisagvik College, providing resources and research experiences to students at the only U.S. college in the arctic. Nicholas-Figueroa recently won a $200,000 NSF-Tribal Colleges and University Program grant to continue work that she started during a BUILD pilot project. That project also supported BUILD students, and it was pretty cool: literally. She studies arctic microbes! Her setting is key, giving her the extraordinary opportunity to examine effects of a warming climate on the physiology and ecology of local wildlife -- and in turn the humans who consume it as part of their routine diet. BUILD enables Nicholas-Figueroa to use technology otherwise unavailable in this frigid, faraway neck of the woods: genomics and gene sequencing, soil-measurement techniques, and informatics analysis. 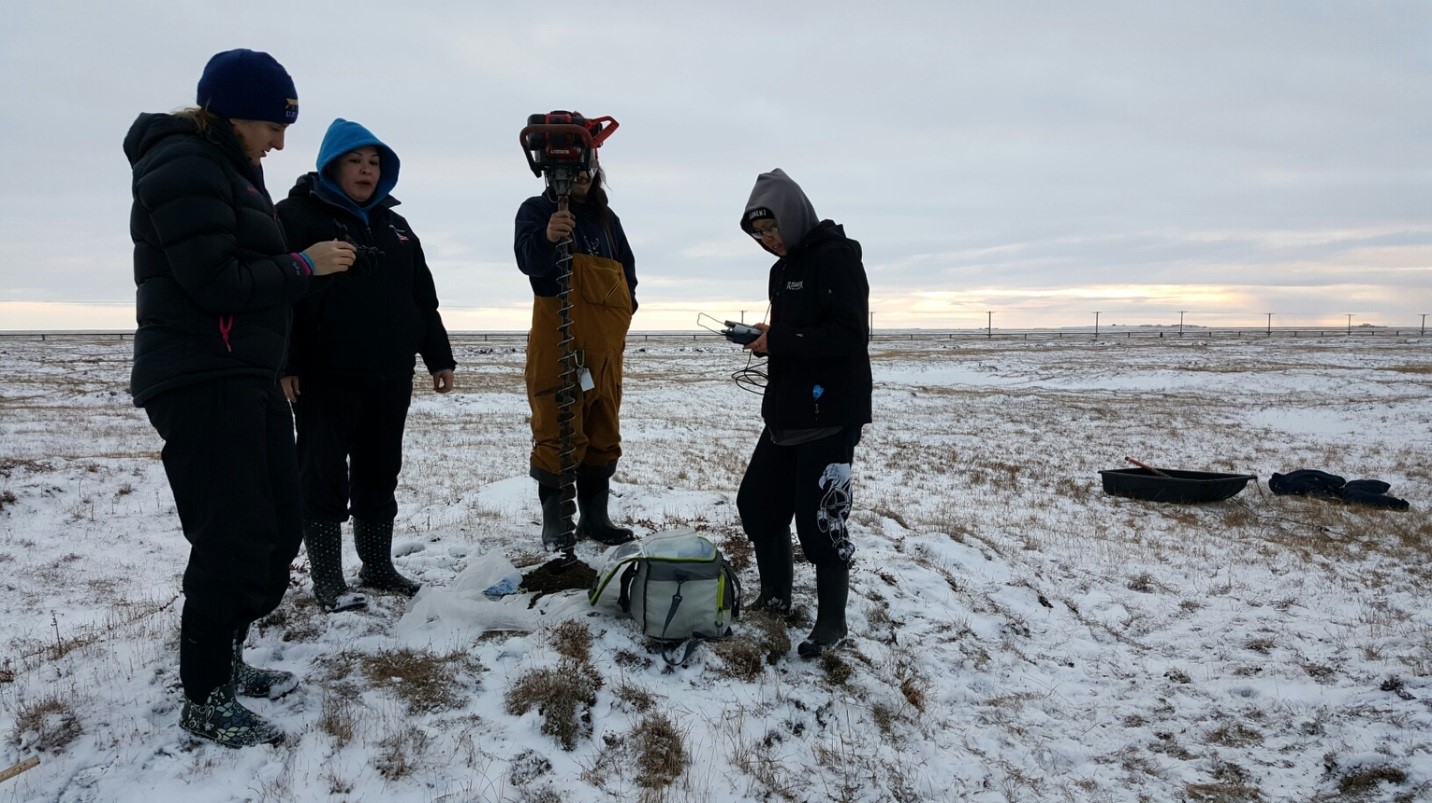 For Brianyell and Gabriel, getting into the lab proved transformative, and each is charting an exciting course made possible through BUILD resources. And as a scientist working in an extreme environment, Nichols-Figueroa is answering questions that can’t be addressed in many places on Earth.

But as I mentioned, another important focus of the Diversity Program Consortium grand experiment is its focus on studying institutional culture and its effects on individual choices and behaviors. What is it about a learning environment that promotes success…or failure?

For example, Dr. Avi Ben-Zeev at San Francisco State University (SF State) has developed a stereotype-threat training module called Speaking Truth to EmPower (STEP) that is being tested on students there. Stereotype threat is insidious: often unknown to people exerting it as well as to recipients of it. It happens when an individual shows fear of exhibiting a stereotype associated with one’s identity group (for example, an African-American female doctor), and then becomes overconcerned about performance and living up to expectations. While that may not seem significant, it places a “cognitive tax” on the individual. That woman must try harder and she worries more, sapping energy and producing the result she is trying to avoid. Ben-Zeev is using the STEP tool as a change agent for female and male students from groups underrepresented in science. In short, after explaining stereotype threat to the students (so they know what it is and can identify it), he asks them to think about a real-life situation in which they’ve experienced stereotype threat and how they would counter it. By externalizing the threat – “it’s not my fault” – the students can let it go and lessen its impact. Already, Ben-Zeev is starting to see positive effects of the training on students, with outcomes such as better grades and a greater likelihood to pursue science. Ben-Zeev partners with researchers at the University of California, San Francisco (UCSF) – SF State’s partner school. There, social psychologist Dr. Mica Estrada is part of the data analysis team to understand the impact of BUILD at SF State and nationally.

These are just a few spotlights on what NIH is doing to promote a diverse research workforce – and our lessons learned will be put to use immediately nationwide. Stay tuned for future blogs where I’ll talk about other success stories in every corner of America!